Which Comes First: Sex Or The Relationship 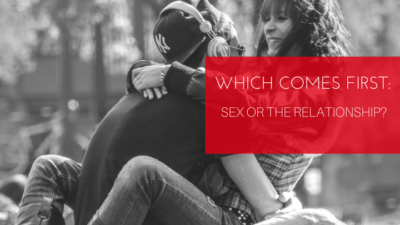 Some people believe that sex before the relationship is a no, no.  While other people think the only way to gauge whether a relationship will work out is to have sex with that person.   Let’s explore some of the differences:

Sex Before The Relationship

For instance, having sex while you’re still dating does not always lead to a committed relationship.  And, if both parties don’t talk about what sex means to them, feelings can get hurt.  This means if you’re a guy looking to have sex but you’re not really sure about a committed relationship, then be honest about your intention.

The same thing goes for women.  Don’t have sex with a guy you’re dating because you hope it will lead to a committed relationship.  Instead, be up front with him about your intentions.  If it’s just sex, then fine.  But, if it’s more than just sex, you owe it to him and yourself to let him know.

On the other hand, there are lots of things that can go wrong when you wait to have sex, such as not being sexually compatible.  But for people seeking a relationship over sex not being compatible in values and beliefs is far worse.  After all you may have two hours of mind blowing sex, but what will you do for the other twenty-two hours?

While people like to believe that sex and relationships are synonymous.  Most people, particularly men, think of sex as an isolated incident.  Sex does not always come with love or marriage.  Maybe to keep things in perspective it’s best to figure out very early on who you are dating.  And, the best way to do that is through communication and transparency. The dating phase is a great way to get to know someone.  So, instead of complicating things too early on with sex, or rushing into a relationship for sex, be present to the dating journey.