What to Expect Dating A Single Mom 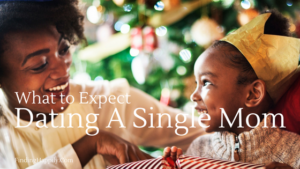 For one thing dating a single mom means you’re not just dating her, you’re also dating her child. And, assuming the child’s father is in the picture, i.e., he’s still alive and lives close by, at some point you will have to deal with him too.

When you first start dating a single mother it might be months before you and the child meet. For starters, she may want to be sure the relationship is going somewhere before she introduces you to her child/children. No single mother wants to introduce her child/children to a man and then have to reintroduce them to another man three months later, so she’ll want to see how the relationship between the two of you progresses.

Another reason you may have to wait to meet her child/children is because she needs to be certain you like children and that you are safe to be around her kids. It’s not uncommon for men who prey on children or who have a violent history against women to date a single mother, so until she is certain that you are safe you won’t meet her kid/s.

Another thing you might notice when dating a single mother is how little you get to actually spend quality time with her. Since she has to plan all of her dates around a babysitter, a relative that loves spending time with her kids or live in help, date nights might not be as sporadic as you’d like them to be.

When You Meet Her Children

Once you make it past the probationary period, you have let her know where the relationship is heading, and she’s done a thorough screening of your criminal and background history, she will want to introduce you to her children.  By this point you may be pretty nervous about meeting her kids, however, excited to meet them because she’s talked so much about them, showed you pictures and told you what great kids they are.

On the flip-side her child/children may not fall in love with you right away. Or you may wind up dealing with a child that doesn’t like to share his/her mom. And, if this happens the key is to be calm, be patient and be you. Sooner or later they will warm up to you just like their mother did, and they will see all the wonderful things she saw in you.

Lastly, if it starts to look as if the two of you are getting really serious, it’s likely her children will become an intricate part of the relationship. You may even have to spend some quality time with the child/ren alone to see how well you get along when she is not around. During those times it’s important you continue being yourself. However, it’s also a good time to show them how much you care about them and their mother. The idea is to create a sense of safety and trust between the two of you. However, keep in mind once you win their trust they will expect for you to maintain that trust. So, if you think you are not ready to commit to the mother and her children, now is the time to reconsider taking the relationship to the next level.

To conclude, if you’re a single man on the dating scene then you have probably met some really great single moms. And, while it’s an adjustment to date a single mother, it can also be quite rewarding.

This article was originally posted on The Good Men Project, and republished here with the author, Collette Gee’s permission.