5 Signs Of An Insecure Man

Signs Of An Insecure Man 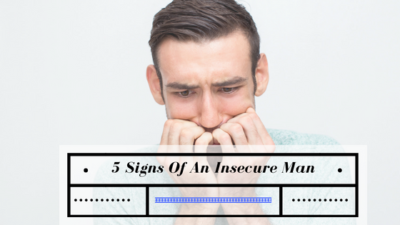 Below, are the 5 signs of an insecure man.  An insecure man can come in any package: rich or poor; short or tall; attractive or unattractive.  He is a man that seeks an unhealthy level of validation and attention from the outside world.  Most insecure men do not even know that they are exhibiting insecure behaviors, and those that do know are much too ashamed to admit it.

So, what are the signs of an insecure man?  I will get to that shortly.  First, it is important to understand that not all insecure men exhibit the same signs of insecurity.  In fact, some men, particularly the ones that recognize their insecurities, have learned how to hide those feelings.  Yet, hiding insecurities is not a long-term solution, as it only prolongs the issue.

5 Signs of An Insecure Man

A man that is insecure is usually a dishonest man.  This could be in the way of outright lying, such as: inflating who he is or what he does for a living.  Or it may come in the way of cheating on his romantic partners or cheating people in business.  In either case, he does not have the courage to be upfront and honest with anyone he deals with.  It could be that he fears being rejected or simply that he lacks empathy for other people because of the way he feels about himself.

Usually insecure men have very little friends.  Since they do not feel confident about who they are and they are very negative in the their thinking, they tend to be loners.  If by some chance they do have friends or a small social network, they push people away because of their inability to communicate.  This can come off in the way of seeming too shy or completely standoffish.  In either case, an insecure man often comes off as sociably awkward.

Insecure men have difficulty maintaining eye contact with anyone.  The idea of looking someone in the eyes makes them feel extremely uncomfortable, to the point of causing them to sweat or they may become thirsty or fidgety.  In a relationship a man who is insecure will avoid confrontation, particularly in an argument or heated discussion.  He may also avoid looking at his partner over dinner or during lovemaking.  It could be that a man that is insecure does not feel comfortable looking people in the eyes for fear that his insecurity may be detected.  Nevertheless, very often an insecure man will avoid eye contact at all cost.

When a man feels insecure, he has a greater need to be validated and accepted.  Therefore, he will suck the energy out of anyone that he is around.  In a relationship this may look like: jealousy or abuse.  He may appear to be attentive, but the moment he is not getting the attention he needs, he will lash out.  He may divulge too much personal information about himself, and he expects you to do the same.  Since he is likely a dishonest person, he is not trusting of what other people say, and therefore may come off as accusatory.  This is also because insecure people deflect their insecurities onto others so not to appear insecure themselves.

Most bullies are insecure men.  They may come off as scary, loud and obnoxious, but in most cases they are nothing more than an insecure man.  In America for instance, an insecure man, often carries out most of the mass shootings.  Another example is a man that physically abuses his wife or rapes a woman. It is the insecurities he has within that leads him to assault, harass or subject other people to pain and ridicule.  Insecure men that behave like bullies are the most common example of an insecure man.  However, most people don’t usually see bullies as insecure because of the tough persona that they give off.

These 5 signs of an insecure man are not the only ones.  While some insecure men exhibit all of these signs, some have learned to mask their insecurities.  Having some level of insecurities is normal — except when the insecurities spill over and become destructive.

If after reading the 5 signs of an insecure man, you or someone you know is ready to deal with your insecurities, there is help.  Being insecure does not have to be the end all, be all.  There are useful tools and techniques that can help build confidence, self-esteem, thus creating a healthy and balanced life.