Will We Be Dating Sexbots 100 Years From Now? 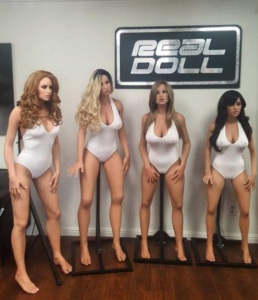 Recently, I watched a video on Facebook about a female sexbot created by a company named Realbotix. The name of the sexbot is “Harmony,” and it is a fully functioning, realistic looking female robot with soft skin and a soothing voice. Harmony is capable of having a conversation, a romantic moment and can engage in sexual activities. All the physical details of this robot can be customized and tailored to a man’s desires. However, the company’s claim is that while this silicone, life-sized dolls can fulfill certain requirements for a man; it is not meant to replace human interaction, but rather work as an alternative.

Most of the comments underneath the video were either strongly for or strongly against these life-sized sexbots. Some argued, sexbots would replace women and thus mocked and labeled men who used the dolls as losers. While others celebrated and praised the creators for inventing a product that would provide all the advantages of a woman, without all the disadvantages such as: nagging, alimony and weight issues.

I was not really sure what to think about these life-sized dolls/sexbots. However, after I watched, and then scanned the Internet to learn more about these robots, I began to wonder: If sex dolls and robots are a reality in 2018, will we be dating sexbots 100 years from now?

Did Women Push Men Into The Arms Of A Female Sex Robot?

I cannot help but wonder if the reason men are opting for robotic dolls instead of a female human companion is because women drove them to that conclusion. When you consider that women are the ones that play with dolls, then perhaps women modeled and molded societies perception around dolls.

Take Barbie Dolls for instance. Upon receipt of their first Barbie Doll, girls set out to purchase the Barbie house, car, clothes and accessories all so they could create a perfect world for Barbie. Once a girl has everything her Barbie needed, she then purchased the Ken Doll, the dog, and a couple of infant dolls to make Barbie’s life complete. After that, a girl had no need for Barbie, and would thus graduate from playing with Barbie Dolls to kissing her first boyfriend and so forth. However, not every girl grew out of playing with Barbie.

Some girls matured, stopped playing with dolls and grew into productive members of society. Some girls never learned to stop playing with dolls, and, instead sought to adopt the lifestyle and physical characteristics of their childhood plaything. They purchased fake hair, fake lips, fake breast, fake asses, fake nails, veneered teeth, fake eye lashes, and makeup. And, then after they were done creating their perfect and fake new identity, they set out to find a “real man” who would love them for who they “truly” were.

Now, in no way am I claiming that what I am proposing is the “facts.” Hell, for all I know, it was men that imprinted the desire onto women to be “perfect” (like Barbie?) After all it was a man that created the Harmony sex robot was it not? However, if it was women that desired a physical, yet unrealistic standard of beauty, then women can only blame themselves if in fact men decided to play with real dolls instead of playing with a woman acting as one.

So, if this is where we are – building sex robots – and this is what dating look like now, what will dating be like 100 years from now?

I would say pretty dam grim!

Since the dawn of the Internet people have opted for, and accepted virtual connections over real life connections with other human beings. Because people are living under the assumption that machines (i.e. computers) do it better, faster and without error, it is that same level of perfection that we now seek in our romantic relationships. Surreal.

It is because of our imperfections, our quirkiness that we are perfect. Perfect in our “mundane humanness.” However, if we continue to use technology to reconstruct our romantic relationships over the next 100 years we will miss out on opportunities to truly be seen as special in the eyes of another human being: Real humans, who made a free-willed decision, a choice to love us for who we truly and totally are. And, no matter how perfect we make a robot, we will never be able to give a robot the one thing all humans desire: a free willed human who made a choice — for us!

Collette Gee is a Relationship and Violence Prevention Specialist and the author of an innovative book on relationships called, “Finding Happily…No Rules, No Frogs, No Pretending,” (available on Amazon). Through workshops, coaching programs and services, Collette provides a positive and educational approach about healthy relationships. Her passion for social justice and healthy relationships has given her a powerful foundation to spread her message; “Finding Happily is not an ending, it is a journey.” Her mission is to teach men and women how to live successfully and harmoniously