Stop Wasting Your Money on Dating Apps and Dating sites 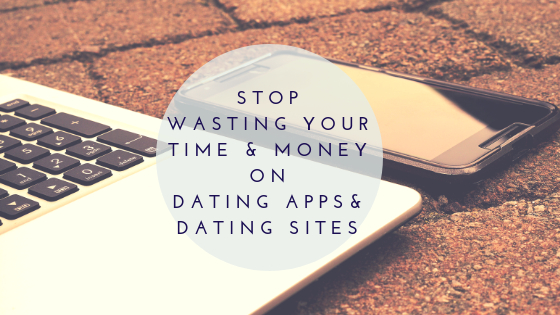 Dating apps and dating sites are a tool that can help you gain more exposure to dating prospects.  Yet, most people use them as a substitute instead of an aid.  Most people subscribe to dating apps or dating sites because  they believe they will find love through the smorgasbord of online possibilities.  However, what most people find are tons of profiles that don’t match their values or meet their standards.

Another major issue with dating apps and dating sites is that most people don’t chose people for who they are, but rather for what they are.  Dating services promise something they cannot deliver.  They set people up for failure because they lead people to believe they can do something for them that they are not going to do.  Dating apps and dating sites are not matching people based on what they want.  They match people based on their weight, height, where they live, their age and their political and spiritual background. Therefore people may appear to fit a persons physical needs, but do they meet the standards that matter most.  On the surface it may appear that people are meeting their match, but they are only meeting who the person is on the surface, and not who they are below the surface.

You Don’t Really Want A Relationship

Perhaps, single people that use dating apps and dating sites do so because subconsciously they want to be single. Otherwise they might find a more realistic option to dating.  For instance, most people log onto a dating app or dating site believing that Mr. or Mrs. Right will show up on the screen.  But, this method is unrealistic because dating requires action.  The same amount of action is required if you were you looking for a job or a new place to live.  Sure, you might use an online platform to connect you.  But, then you might also hire a recruiter or a realtor to further help.  You might even go directly to the business you want to work for or search for rent signs in the neighborhood you want to live in.   Dating apps and dating sites are no different.

To conclude: If you’re not going to use dating apps and sites as tools, then stop wasting your money on dating apps and dating sites.  Dating requires that you actively put yourself out there in order to meet someone new.  Therefore if you’re scrolling behind a computer screen or swiping left or right you are not dating.  Sure, you can connect with someone using these formats, however only if you’re going to use organic methods of dating at the same time.  On the other hand if you do not know what you want, who you’re looking for and what you’re attracted to, you’re not ready to date.